You may well be aware of rune stones, and also aware of how to spell cast a.  But are you aware of the meaning behind each stone? Did you know that if you were aware of each rune meaning that you could then create your own rune stones?

Well to follow on from our recent articles about rune stones and rune casting this article focuses on rune meanings and explains the rune meaning for each of the 22 Rune stones.

What Are Rune Stones?

Rune stones are a set of 22 stones (or more depending on what set you use) that are used for divination purposes.  We explain more about runes stones, if you are not already familiar with them, and how they work in this article: Rune Stones, or you could learn more about how to cast runes in this article:

How Are Rune Meanings Applied?

Rune meanings are applied by using symbols; each stone has a specific symbol which is based on an ancient alphabet.  Each symbol holds specific meaning and when you ask a question and pull out a rune from their bag in response to your question you will receive the appropriate advice in symbol form.  Your job then is to translate the symbols so that you can understand the meaning and to help you do so; we’ve included the meanings of the Elder Futhark set below.

Fehu is the lucky rune; its rune meaning pertains toward physical experiences or rewards you might gain when you’ve worked hard toward attaining a goal and are finally about to reach that goal.  You might even be already enjoying the increased status and personal power that you have around you at the moment when you find Fehu in your presence!

Uruz represents the life force that we all experience whether that be in ourselves or around us in nature.  Which means Uruz can relate to our physical health, healing, how we manifest, courage and how vibrant and enduring we can be.

When Uruz is present, it will bring to your awareness your determination, independence and persistence in achieving your goals in life.

You could consider Thurisaz to represent governments, society, and the forces that are bigger and more influential than us. Including those forces that are unconscious or unseen by us.  This rune meaning can represent the destruction that can occur when one is stronger than another, and so it represents destruction, conflict, and chaos and all of the forms that these forces can take.

The rune meaning for ansuz is all about the breath of God, divine inspiration the voice of the universe, intelligence, communication, song, spells, ancestry, etymology, it’s base is in how we listen and communicate, not just to each other but also to ourselves.

We can find Raidho present whenever we are acting morally or fighting for moral justice.  When Raidho is present expect rationality, sound advice and wisdom.

Kenanz represents our knowledge, intellect as well as illumination and enlightenment. Kenanz is present when we have an epiphany or are searching for truth or knowledge.  You can also find Kenanz when we are creative, through our intuition and on our road to mastery.  Kenanz also represents Clarity, technical ability, and exploring new insights.

Keywords: Sex magic, understanding of the true meaning of gifting and binding, Favours, contracts, obligations, debt and oath-taking, Mystical union and ‘Sacred Marriage’ between partners and giving of oneself from within.

Wunjo strengthens links and bonds, Invocates fellowship and harmony. It creates joy through the use of pure will and banishes alienation.

Hagalaz Represents: Crisis, catastrophe, disruption, and  radical change these situations often occur so that we might grow and evolve significantly.

Keywords: Completeness and balance of power, integration of unconscious shadow elements, the inevitability of Fate, Evolutionary progress and operations of becoming, Protection through banishing or exorcising disharmonious patterns, protection, causing discomfort in others by awakening their own subconscious ‘garbage. ’Destructive elements of nature, severe weather, the uncontrollable, unavoidable unpleasantness, Jungian shadow, psychoanalysis, regression, acceptance of the unalterable.

Nauthiz brings the quote ‘do what you need to do so that you can do what you want to do’ to the forefront of my mind.

Isa is the rune of stillness in all things, a static or frozen state.

Keywords: Concentrated self, ego-consciousness, self-control, a unity of being, egomania, dullness, blindness, dissipation, immobility, self-centeredness, lack of change, psychopathy. Development of concentration will and focus, halting of unwanted dynamic forces as an act of self-defense (and against demonic influences), Focus of the will into single-minded action.

Jera is the rune meaning harvest and reward, it also implies reaction and, right actions, especially in an orderly process.  Jera is the rune of peace both in the heart and physically.

Ihwas is the process of spiritual realization and in connecting the higher and lower planes in existence. It’s also the rune that represents the mysteries of life and death. With Ihwaz you’ll find liberation from the fear of death, develop spiritual endurance and spiritual vision.

Perthro is the rune of fate, and it also represents everything that has not yet manifested into existence.

Algiz is the rune that connects with the patterns of divine consciousness,

Tiwaz represents balance and justice which is attained from higher wisdom. It’s the rune of self-sacrifice and for the service of others.

Berkano is the rune of continued growth and rebirth in all things.

Ehwaz is the rune that represents trust and teamwork.  It especially relates to the notion of working together for a common goal.

Mannaz is the rune of human intelligence, human existence and collective potential.

Keywords: Mind & memory, the difference between human and all other life, development of the intellect, rational thought, perfected intelligence, the psychic order of the gods reflected in humankind, a projection of Self into time, planning, thinking, analysis.

Laguz is the rune of the unconscious and also the evolutionary process of growth and personal development.

Inguz is the rune of isolation and transformation and also represents personal growth. 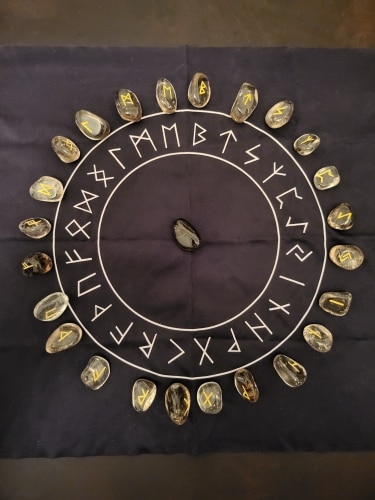